The Cavaliers defeated the Warriors, 93-89, to win a historic Game 7 and earning Cleveland its first major sports title in 52 years. The Cavs became the first team to come back from a 3-1 deficit to win the title in a game that saw 27 and 26-point games from LeBron James and Kyrie Irving, respectively. Throughout 48 minutes, plenty of athletes weighed on social media during the epic matchup that came down to the wire.

Lebron just solidifying himself as the KING!!!! All this guy does is ball, it’s about time he starts getting a little respect!! #Witness

Wow! Congrats to Lebron and the cavs. That was one hell of a comeback!!!!

Man this series was classic. #NBAFinals🏆

That 3 by Kyrie is usually what Golden State does to folk!! #cutthroat

Cleveland you deserve it. Congrats

I THINK WE HAVE A BALL GAME FOLKS!!!! pic.twitter.com/H0PQiv9WEq

Dude filmed Trainwreck last offseason.. Signed a billion dollar deal.. He’s about to be MVP of another finals.. Lebron’s life is majestic.

I told you never go against @KingJames never

Lebron just took his league back

Kyrie is Ridiculous With A Basketball.

FIRST of 33 teams to ever overcome a 3-1 #NBAFinals deficit.
FOURTH to win Game 7 as road warriors. #NBAChampions pic.twitter.com/8bxeRxg358

Just got off my flight to catch the end of the @NBA finals. What a game. Airport huddle with all the other sports fans

ahh game of thrones now. congrats to the city of Cleveland! #welldeserved

Can we get a “where are they now” series on the ppl of Cleveland that burned @KingJames jersey in 2010?

Great showing by both teams. When does football start?!

Why is Usher there!?!

Is that Usher on the podium?

Is @verizon and @sprint beefing? I feel like they’re throwing jabs at each other in these commercials

Anybody know how this NBA finals game compares to the Super Bowl in terms of viewers watching?

Lebron wit all this passing? Is he sick?

Safe to say I’ve lost at least three years of my life during this game! #stress #NBAFinals

Look who stayed out for the whole game. He will always remember tonight and Lebrons greatness. pic.twitter.com/qhV6hemBJM

I’m not sure about these Cleveland uniforms. #nbafinals 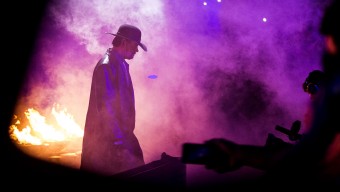