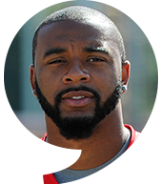 A charter bus packed with NFL rookies is traveling down a rural Ohio road en route to the rookie symposium when a heated debate breaks out. Should Tajh Boyd have gone pro after his Junior season or stayed at Clemson for his Senior year? Some say it’s a no-brainer — definitely go pro. Your stock is high. Go get paid. Others say they’d stay in school. Winning a Heisman Trophy or a National Championship is a dream, and you’re the top quarterback going into the season. Stay. Go. Stay. Go…

And I’m hearing every word. I was on that bus, but the debate raged like I wasn’t even there. Everyone had an opinion. It was weird, hearing the story from other guys — my story. There’s no right or wrong answer. It could have gone either way. And that’s the thing: It wasn’t their decision, it was mine.

I’m the only one who has to live with it. What did they care?

I was coming off a killer junior season in which I threw for 3,896 yards, with an ACC-best 36 TDs and 10 rushing TDs. Going into that year, the NFL Draft had never really crossed my mind. But everyone has that Aha! moment where they think, “Maybe I’m ready for The League …” 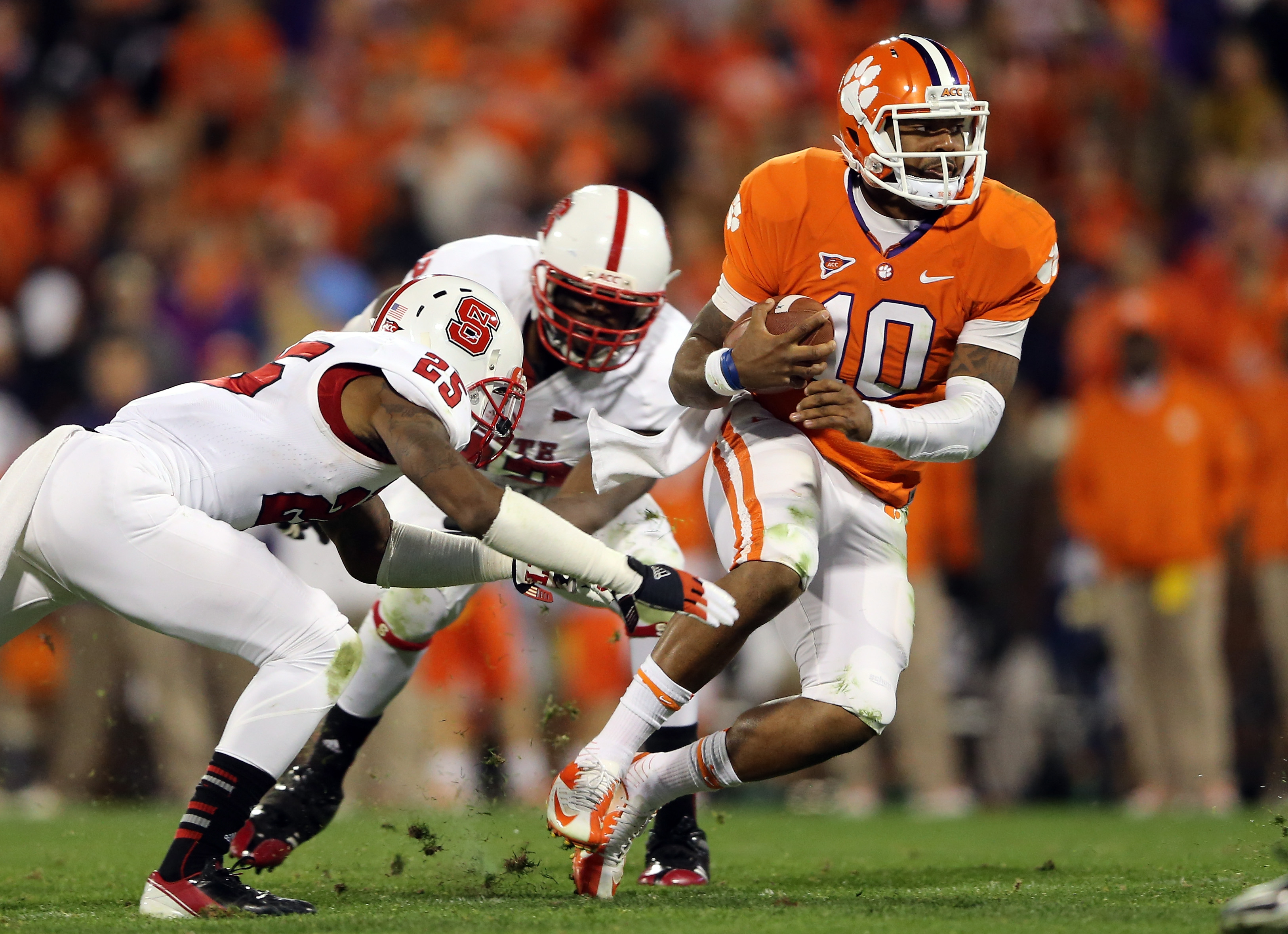 My Aha! moment came against N.C. State during that junior season. We had some crazy games that year, but that was the craziest. We were ranked No. 11 in the nation at the time and the opposing QB was Mike Glennon (now with the Buccaneers), who was being talked about as a pretty good NFL prospect. I always compared myself to the quarterbacks I was playing against. Even though you’re not really going head-to-head with them, you always want to be the best quarterback on the field.

It was a shootout. Mike and I each threw five TDs, but it was on the ground that I made the difference with over 100 yards rushing and 3 TDs to lift us to a 62-48 win. All in all, I accounted for 529 all-purpose yards and eight TDs — video game numbers.

Everyone has that Aha! moment where they think, “Maybe I’m ready for The League…”

That was the first time the NFL Draft idea became real to me. I had a lot more work to do, but my resume was looking pretty good. If Mike Glennon is a legit NFL prospect, and I outperformed him, I thought, why can’t I make the leap?

The season went on and we finished strong. We went 11-2 and I was named ACC Player of the Year and First-Team All-American over Heisman-winner Johnny Manziel. But I still wasn’t fully convinced I was ready for the NFL. I had one more test: the Chick-Fil-A Bowl. 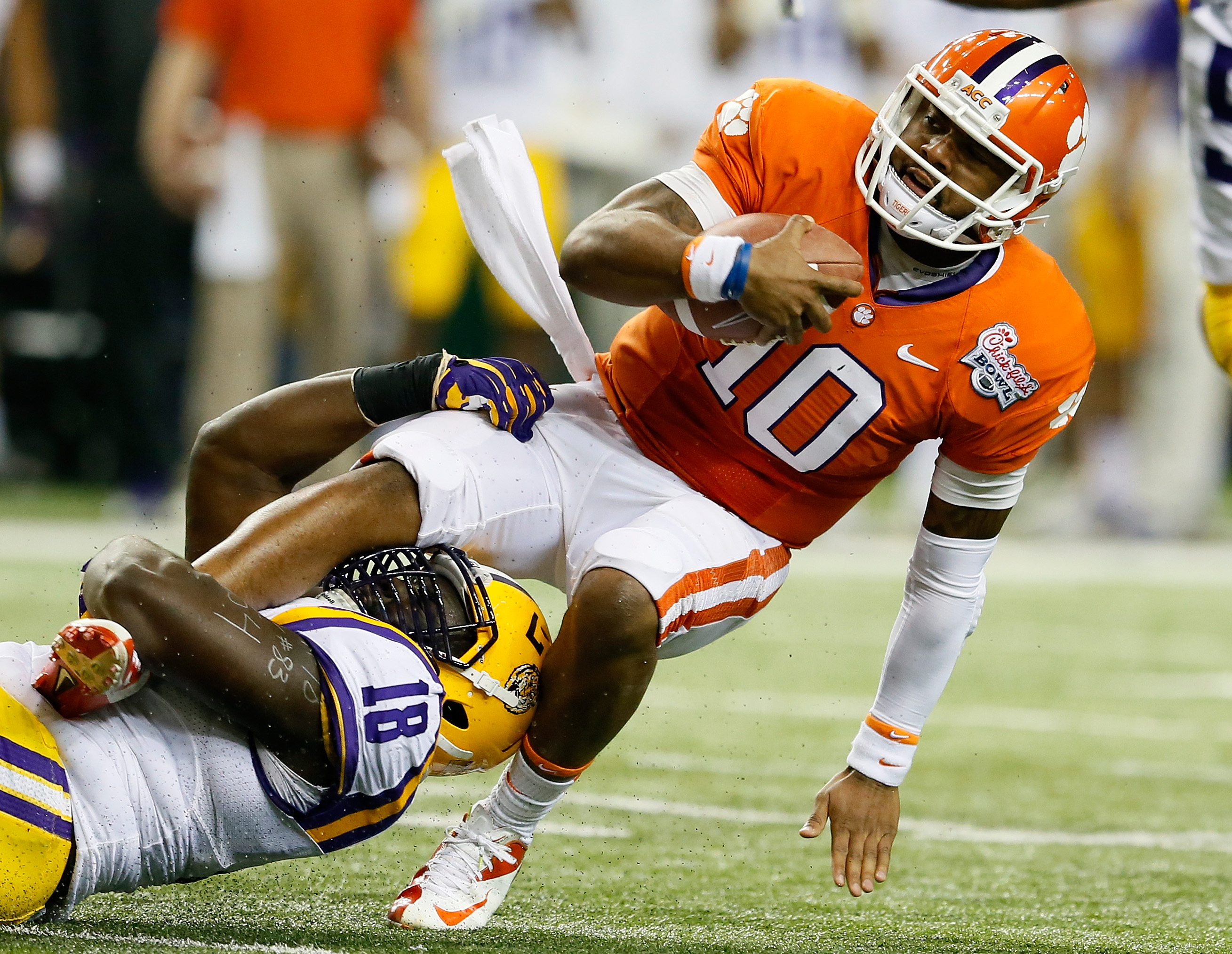 We were heavy underdogs against an LSU team that was in the BCS Championship Game the year before. They had a lot of NFL talent on defense: Barkevious Mingo, Eric Reid, Bennie Logan, like seven guys from their defense got drafted that year. I was going up against the closest thing to an NFL-caliber defense as there was in college football, so I figured, why not make this my measuring stick?

I set goals for myself against LSU. I’d let the numbers decide, like if I could throw for X amount of yards and so many touchdowns, I’d enter the draft. And not only did I hit all my marks on the way to a win, I was named Chick-Fil-A Bowl MVP. 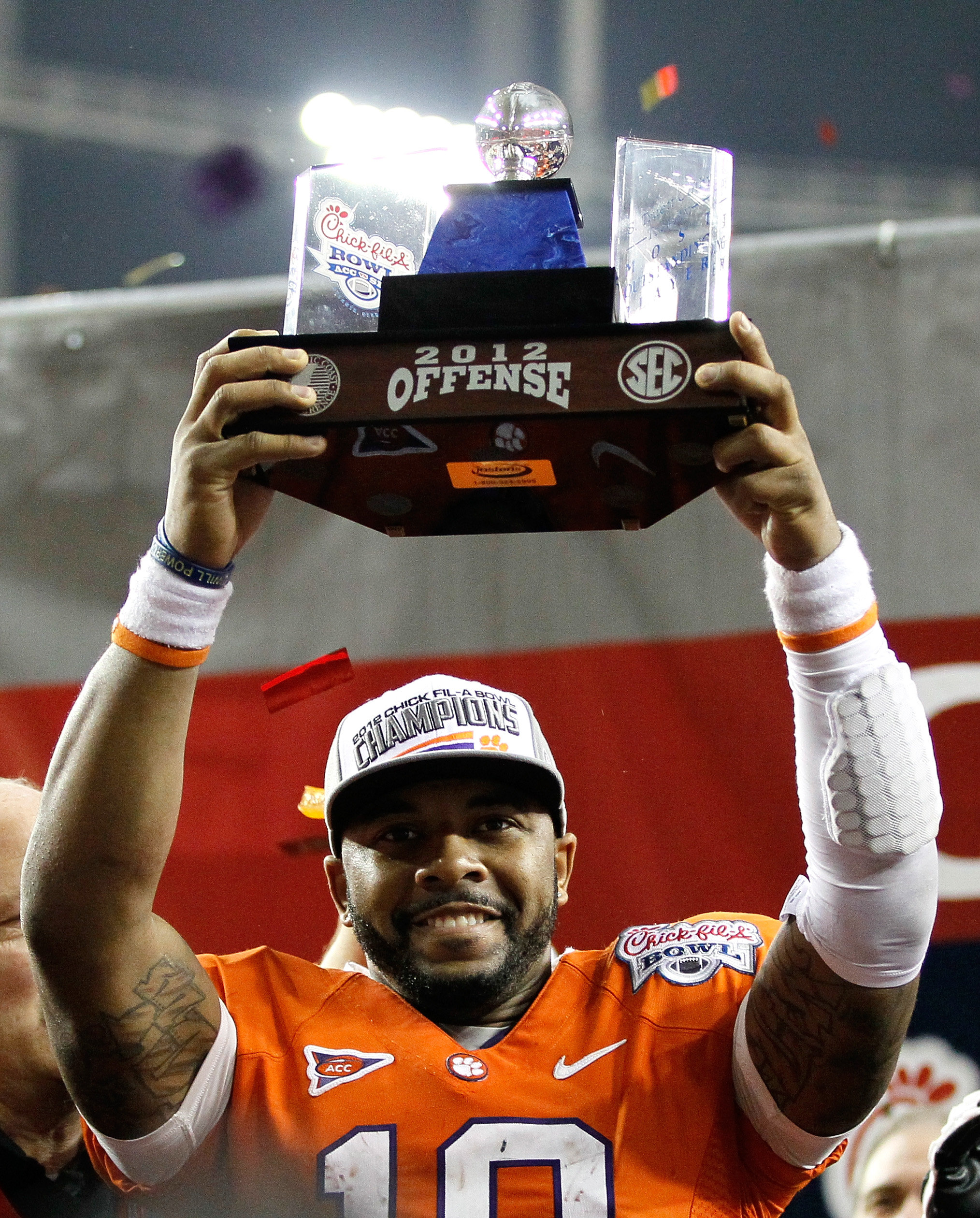 In that moment, I thought I was going pro. But after the pads came off, the cameras stopped flashing and the hype died down, and even though I had met my self-imposed demands, I still wasn’t sure I wanted that to be the last time I put on that Clemson uniform. My numbers were good enough to make the jump. I had all the accolades. But stat sheets and trophy cases only tell half the story.

I drove back to South Carolina. I had a week and a half to really think about it, and that’s when the storm started. There was so much buzz. So much speculation. It’s impossible to ignore the noise. Even if you don’t have a Twitter account, somebody close to you does. It’s like secondhand smoke.

In one ear, you hear: “You were ACC Player of the Year. You beat LSU. You need to get out now. It’s not a strong QB class. You could be a first-rounder.”

In the other: “You’re not mature enough. You need more time to develop as a player. You should graduate.”

It was hard to tell which voice made more sense. They each made some pretty good points. Clarity was hard to come by, so I turned to my parents for advice.

“You make the decision,” they said. “We’ll figure it out. We’re here with you either way.” Totally cliche, I know, but honest. I was lucky to have a family who supported me no matter what. But as far as making a decision, it didn’t help my bottom line. I still had a choice to make. Michael Vick was a hero of mine, so I talked to him as well as Tyrod Taylor and Donovan McNabb for some different perspectives. Their advice was a little more pointed and clear: When you make the leap, you need to be as ready as possible mentally, even more so than physically. In the NFL, the game’s not for little boys anymore.

Physically, I felt like I was ready. But mentally … 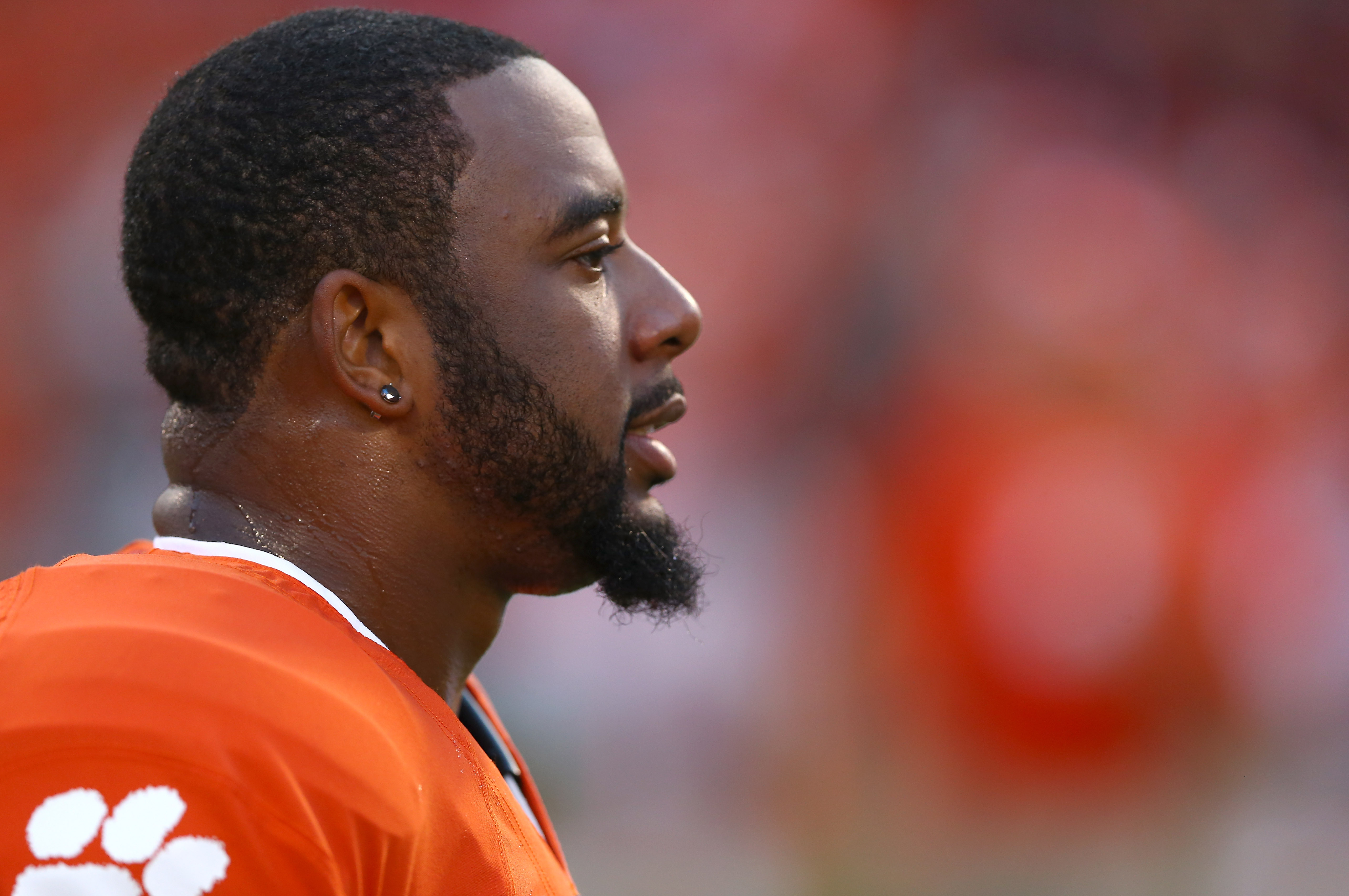 I asked myself: Have I hit my ceiling? Once you’ve hit your ceiling, you have to go. When there’s nothing left to accomplish — on and off the field — it’s time to move on, right?

So I went back to school.

My senior season was basically a replica of my junior year. My numbers were nearly identical. We won a BCS bowl game against a national power in Ohio State. But there was no Heisman. There was no national championship. So even though I didn’t do anything to hurt my draft stock, I didn’t do much to improve it.

I was once projected to go as high as the late first round, but ended up being taken in the sixth round of the 2014 NFL Draft by the New York Jets. I was cut before the season, played a year in the FXFL and now I’m still training hard and working out for NFL teams. My prospects look good for the 2015 season and I’m eager to get a chance to prove myself in the NFL. I know it’s something I can do.

Hindsight is 20-20, but I’ll never regret my decision to go back to school. I was able to give myself other opportunities. I was the first person from my family ever to graduate, and I’m proud of that. I left a legacy. I finished what I started at Clemson, and I’ll keep that with me for the rest of my life. There are guys who get drafted in the first round and they’re out of The NFL in three years, then there are guys who go undrafted and play for 10 years. At the end of the day, where you get drafted is just based off opinions. Round 1 or Round 6, it’s still an opportunity. And you have to make something of it. 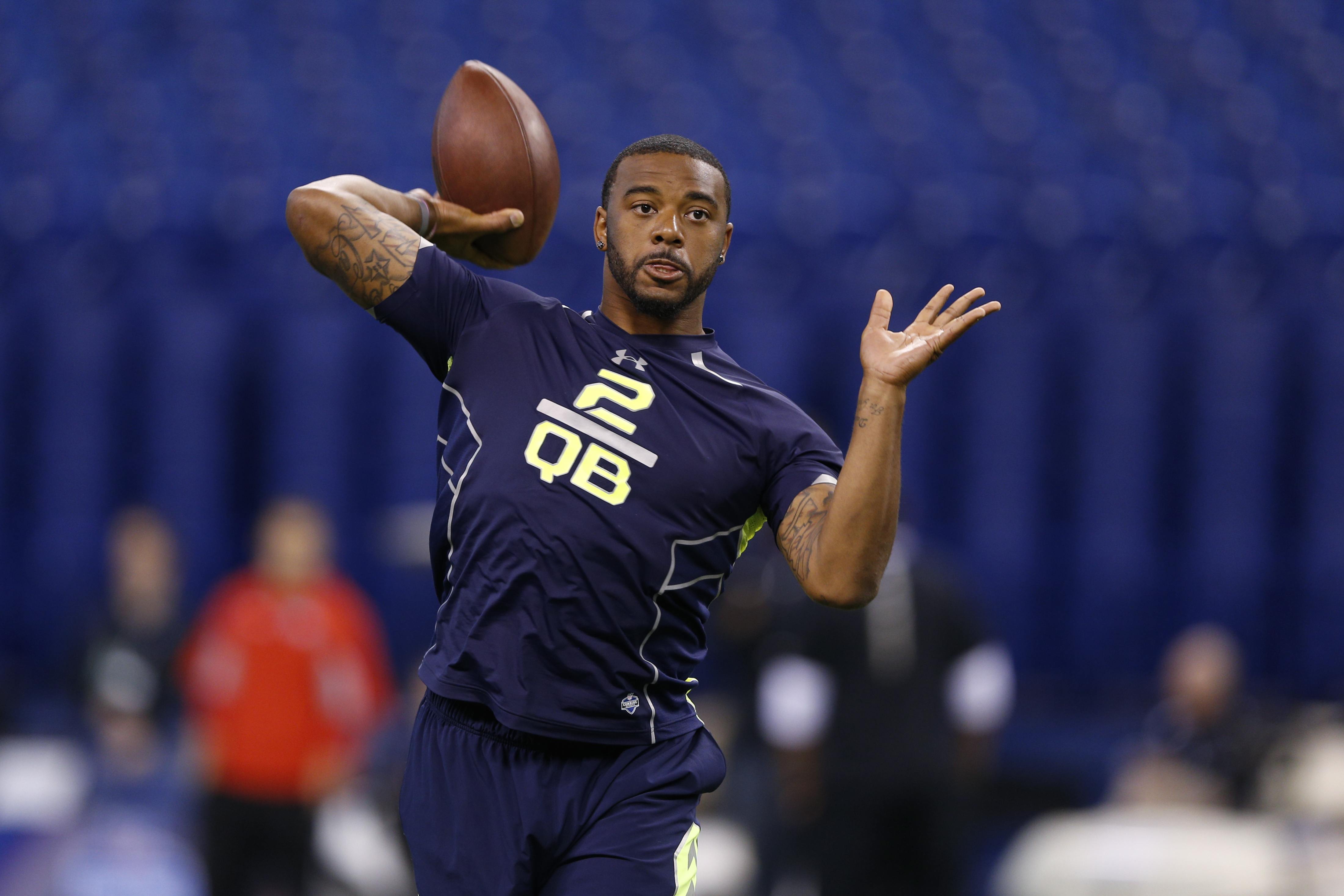 Three high-profile quarterbacks have decided their futures in recent weeks. Jameis Winston and Marcus Mariota are going pro. We’ll see them at this week’s NFL Combine. One will go No. 1 overall and the other won’t be far behind, so they’re both in line for huge paydays. I know Marcus personally — I don’t know Jameis as much. But what I do know is that each has a Heisman Trophy, Jameis won a national championship and Marcus played for one. And I think they each made the right choice. On the field, there’s not much left for them to accomplish.

I’ve never seen anything like it: A guy plays only three games — wins the Big Ten title, the Sugar Bowl and the National Championship — and he’s thinking about entering the draft. It’s unheard of, really. But he played well enough to put himself in that position and it was a decision he had to make, so he made it. He chose school.

He said all the right things at his press conference about the importance of his education. And he also said he wasn’t ready for the NFL. If you’re not ready, you’re not ready. There’s no shame in that. He showed a lot of maturity, being so honest with himself in the midst of all that hype.

That’s the thing about the decision to stay in school or enter the NFL draft. There’s no criteria. There’s no checklist or prerequisite. Everyone’s development is different. Everyone’s family and financial situations are different. No two decisions are alike.

The Tajh Boyd debate didn’t end on that bus full of rookies on that rural Ohio road. There was no consensus, no winner. It just dangled, unresolved. People still ask me if I regret my decision. Everyone speculates about what might have been had I left for the NFL after my junior year.

I don’t wonder what would have happened. Life is a process. You make decisions, you live with them, and you make the best of the situations you find yourself in. At the end of the day, I passed on the draft and stayed in school, and I’m glad I did. Marcus and Jameis made the decision they felt was right for them. Cardale and I made the decision we felt was right for us. There’s no right or wrong answer.

Besides, I’ve got an NFL roster to make. I don’t have time for “What ifs”.

Inside My Second Season 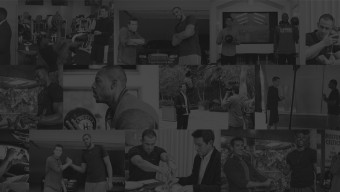