The morning they came to my door, I didn’t hear them knocking.

I was sound asleep in my dorm room in the Rio Olympic Village, trying to get in my eight hours before the 100-meter backstroke finals. I had trained 17 years for my Olympic opportunity, and I was one of the favorites to win the gold in that event. I wanted to be fully rested for my race.

I had it all planned out. I was going to wake up with enough time to go through the routine I’ve been following for as long as I can remember, one that I’ve found works for me: eat my peanut butter and jelly, get to the pool early, stretch, swim some laps, practice my flip turns….

But sometimes things don’t go according to plan.

About an hour and fifteen minutes before my alarm was supposed to go off, I woke up to my cellphone buzzing on the nightstand. I tried to press snooze without looking, but it just kept buzzing and buzzing and buzzing. Right when I was about to throw it across the room, I realized that what I thought was the alarm was actually a call. One of the Team USA coaches, Dave Durden (who was also my head coach at Cal), was trying to reach me. I picked up, all groggy.

Unpredictable stuff is going to happen to you at the Olympics. It just is. You need to be ready to deal with it.

I had no idea what was going on.

“People from USA Swimming have been looking for you. They’re right outside your door. Let them in!”

Why now? I thought. What is this?

I rolled out of bed and opened my door to find two strangers in polo shirts and khakis staring at me. I was half-naked, standing there in my compression shorts.

“Get dressed,” one of the guys said. “We’re taking you for a drug test.”

If there’s one main piece of advice I could give the first-time Olympians competing this month in PyeongChang, it’d be this:

Unpredictable stuff is going to happen. It just is. And you need to be ready to deal with it … even though you don’t know what it is yet.

In my case, drug testers knocking on my door early on a race day were my rude awakening to that fact.

It couldn’t have come at a worse time. In that moment, all I could think about was my race later in the day … and I didn’t know whether I was going to have enough time to get ready in the way that I had planned.

What made things even worse was that the drug testers had no idea where they were going. We wandered the village as they made one wrong turn after another. My stress level was rising. Why now? Why today? The day I wanted everything to go right was the day that I had to deal with the unexpected. Fortunately, life at Cal had prepared me for the unexpected. We were not coddled there. From last-minute group projects, to impromptu cold calls to present my homework to the class, I’ve grown accustomed to being uncomfortable.

And that gets me to my second piece of advice:

2. Keep the pleasure greater than the pressure.

That’s easier said than done, but it’s absolutely critical. If you feel the pressure mounting, you need to do everything you can to rein things back in and stay focused on your ultimate goal. I’ve found that’s something that being a business major really helps me to do.

Still, on that day, it took a bit of help. When we finally got to the testing facility, I was frustrated, to put it lightly — just standing there waiting to get a cup to pee in. And that was when Coach Dave texted me exactly what I needed to hear:

“Ryan, don’t worry about your plan right now. We can adjust. Just take care of one thing at a time.”

One thing at a time.

I took a deep breath.

Dave has always known what to tell me to get me to relax — ever since I was 15 and we talked about the possibility of me swimming for him at Cal.

And that afternoon in Rio, I carried his words into the pool. One thing at a time. One race at a time. One stroke at a time. It didn’t matter who I was competing against, or what had happened that morning. It was just me in my lane.

When it came down to it, I just fell back on all of the years I’d spent training and competing for that moment. I’d been on the world stage before and had already competed against all of these swimmers. I swam collegiately in the Pac-12 — one of the most competitive conferences in the U.S. — from which 46 other swimmers were competing alongside me in Rio.

So of course I was ready.

I recentered and realized that I couldn’t let a little change in my routine trip me up now.

There was no way I could’ve anticipated the drug test in between the semis and the final, but there were a lot of scenarios I had to adjust to during my first Olympics.

After I’d finished with the test and gotten ready to head over to the swimming venue for my race, the shuttle buses were running late. And it became … a big deal.

Things got intense real quick. People were cursing and kicking up a fit in a multitude of different languages.

We’d all been told that the buses would arrive every 15 minutes to go to the competition pool. But that day, one of the buses decided not to show up.

As I sat there waiting, I was surrounded by some of the top athletes in the world — athletes who had dedicated their lives to becoming Olympians. Things got intense real quick when we realized we would have to wait for the next bus. People were cursing and kicking up a fit in a multitude of different languages.

And that brings me to my third piece of advice:

Don’t let other people’s frustrations mess with your state of mind or focus. If you see someone — or several someones — having a meltdown, use it to your advantage and stay in your zone.

Blast some music in your headphones, watch some TV, take a nap, and take some solace in the fact that you are not the one having the meltdown. Do whatever you need to do.

With me, on that bus, I just kept my headphones on my ears, listened to Papa Roach’s “Last Resort,” and put myself in the zone.

Even though I had been thrown off my routine, I adjusted and got back on schedule. And that night I swam the fastest time of my career to that point.

When I touched the wall and looked up at the jumbotron, I saw OR next to my name.

After all that, I had set a new Olympic record.

While I learned to deal with the unexpected when I was on the ground in Rio, I wish someone had told me to keep a journal while I was there, just so I would have a record of all the things I experienced.

That would be my fourth piece of advice:

Take pictures or write in a journal. The Olympics is an event that few of us get to experience. There will be a lot of cool moments for you to look back on.

There are so many experiences — big and little — from that Olympics two years ago that I wish I had written down because I’m sure I’ve already forgotten lots of them. All of the encouraging words, all of the laughs and stories shared between me, my teammates and the other incredible athletes I met while I was there.

Every swimmer has a picture with Michael Phelps. In Rio, it became a topic of conversation on the team. I uncovered mine on the night of the 4 × 100-meter medley relay that Michael and I were swimming together, and decided to show him. It was from 2006, at a clinic that Michael had hosted. I remember how excited and nervous I was to be near him at that time.

Fast-forward 10 years, and I was going to be swimming on a relay with the most iconic Olympian of all time. There’s no better motivator. I was hyped.

The night of the 4 × 100 medley relay in Rio, I began that race knowing that Michael and the rest of the guys were counting on me to give them a good lead. Swimming can be a solitary sport, but one thing I’d really learned at Cal was the value of having teammates. So at the Olympics, swimming for the team, and for my country, provided extra motivation.

At the sound of the buzzer I propelled myself back into the water, and the rest of my swim was kind of a blur. The next thing I remember is hopping out of the pool and cheering on my teammates. I was breathing heavy, trying to catch some air, and before I knew it, our final swimmer, Nathan Adrian, brought it home for the gold!

We all exchanged hugs and high fives. And then Michael turned and looked at me.

“Was that a world record, Murph?”

I hadn’t been trying to swim a world record, I was just trying to get my team the lead. It’s hard to describe the positive impact of competing with a team, for a greater purpose.

As we staged for the medal ceremony, I started to get choked up. That was the first and only time I’ve ever experienced happy tears.

For all the unpredictable things that happened to me in Rio, it was the experience of a lifetime. The Olympics is one of those events where anything can happen. You just have to take the good with the bad and remember to stay confident no matter what.

And I promise you: All of the ups and downs, and even the things flying at you sideways? They’ll all be worth it in the end.

Even if you don’t see them coming.

More Than a Medal 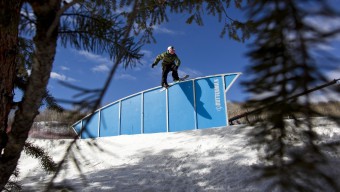