Yao Ming ruined my summer vacation in 2002. I’ve never properly thanked him for that. Today I want to finally do that.

We just called him Rudy.

The year before Yao arrived, we had been terrible. Rockets fans — I know you remember. We won 28 games. We missed the playoffs. The Hakeem era was in the rearview. I remember driving around Houston and seeing the big Rockets billboards that covered the city. A lot of them had my picture on them with FRANCHISE in big letters. Sometimes I’d just shake my head. Our franchise was in a bad place.

By April, the team couldn’t wait to go on vacation. During our last meeting before we left for summer, Rudy was in a bad mood. He came into the locker room glaring at us. He stared right at me, Cuttino Mobley and Glen Rice — the core of that Rockets squad.

“My advice to you?” He said. “Skip vacation. Go home and work on your game.”

Like I said, Rudy was in a bad mood. But even though I knew he was right, I still wanted to enjoy a little vacation. My body was tired, and I wanted to see my family, so I flew home the next day. A week later, I got a call from Rudy. Les Alexander, the Rockets owner, and the GM, Carroll Dawson, were also on the line. They wanted to see me back in Houston right away.

“Call us when you land,” Rudy said, and he hung up. 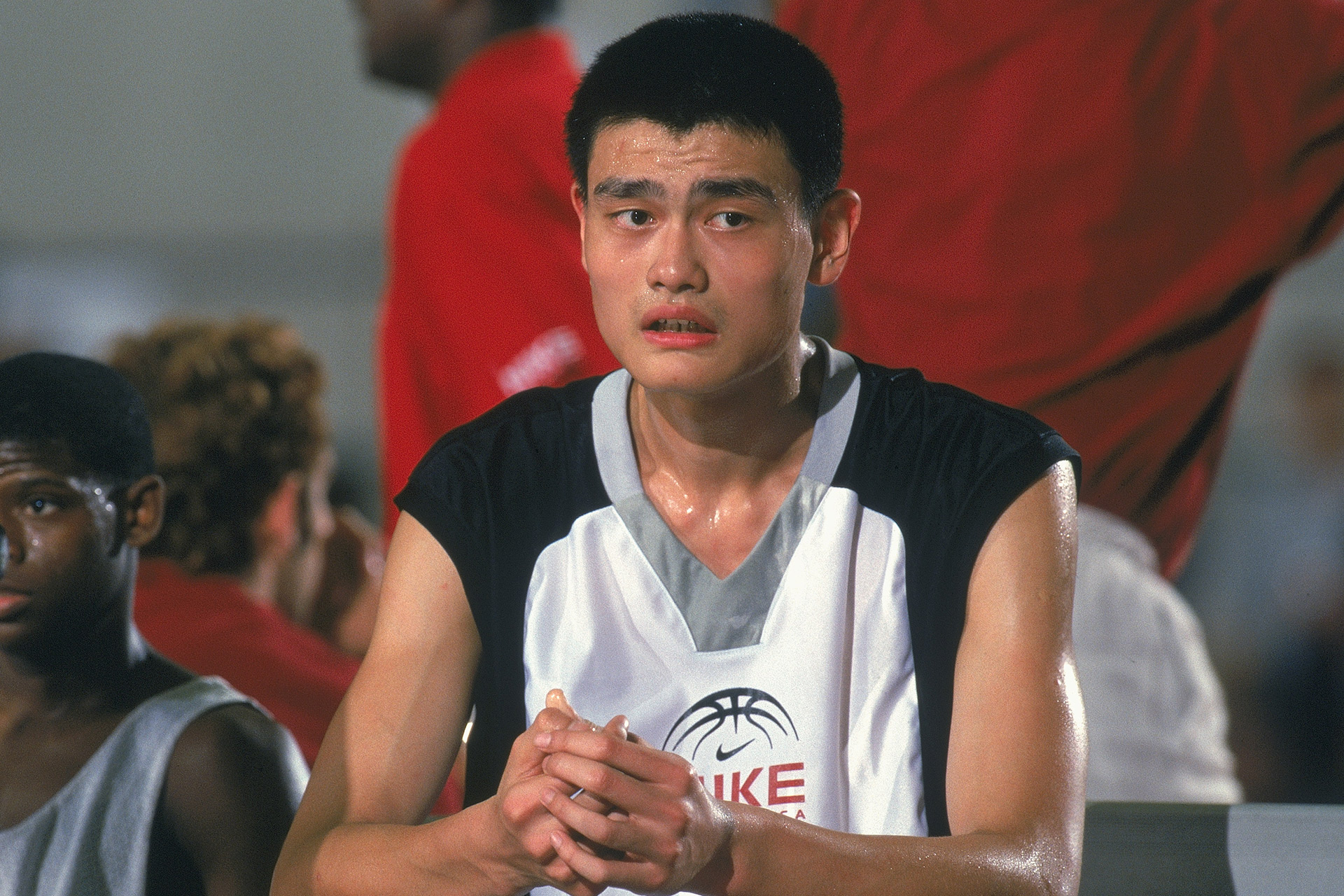 I wasn’t worried about my contract or anything, but it seemed like strange timing. I flew back to Houston. When I showed up at the office, I found them huddled around a TV watching game tape. They had just come back from the NBA combine in Chicago.

“You called me all the way here to watch tape?” I said. I was annoyed.

Then I saw him. It was the first time I’d seen Yao play. I had heard a little bit about a big guy from China, but no one knew much else. Foreign players always seem to get hyped around the combine and then they don’t pan out.

I’ve watched a lot of game tape in my life, and the thing is: 1) It’s usually boring; 2) It’s hard to tell if a guy stands out from only watching a little tape; and 3) I’ve hooped my whole life — nothing a young player does really surprises me anymore.

But Yao was different. This was game tape like I had never seen. This dude was twice the size of anyone else there … and he was shooting three-pointers! And he was nailing them — one after the other. That’s not all. The guy towering over everyone was running up and down the court with ease. He had a soft touch inside. He had post moves. He could even dribble. I was surprised at how athletic he was.

After watching a lot of tape of Yao, we had a long conversation about the future of the team. Before I left, Rudy asked me, “What do we need to complete our team for the future, not only for the next year but for years to come?”

I flew back home. During my downtime, I thought about Yao a lot. I also thought about the Rockets’ future and Rudy’s challenge to me. Could Yao cut it in the NBA? More important, could we even draft him? We were projected to get the 10th pick. Yao was being talked about as a potential first pick.

Not so long after I got back to D.C., the phone rang again. It was Rudy. Again.

“We want you to represent us at the draft lottery.”

“Call us when you land,” Rudy said.

So I got on a plane. Again. 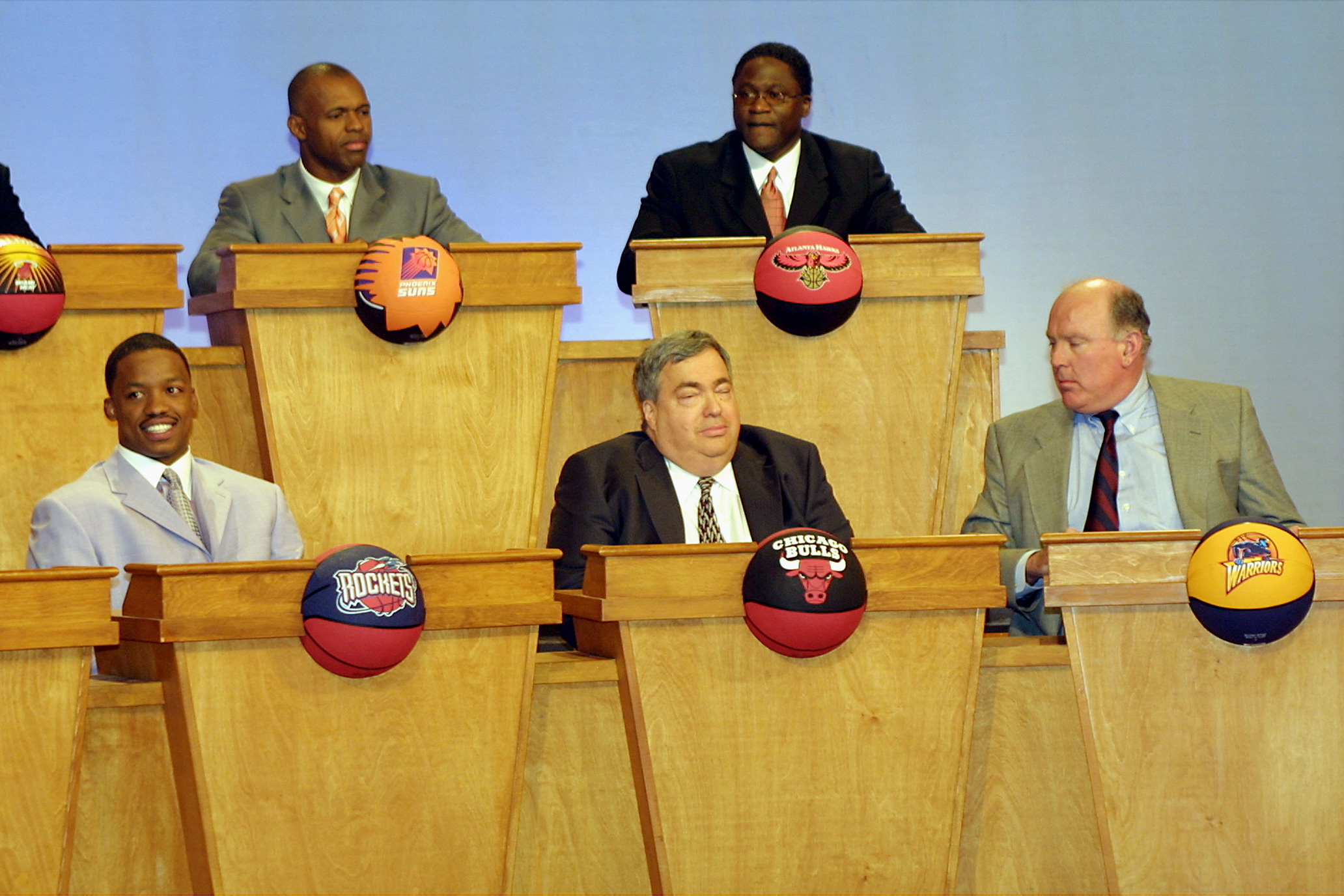 I took a lavender suit that I knew would make my grandmother proud. When I got to New York, everything was more official than I expected. Police were guarding the lottery-ball machine. GMs and owners were everywhere — and not in lavender suits, either.

Everyone was talking about how they were going to get Yao if they got the first pick. He was all the GMs and owners were talking about. Before the show, I just minded my own business because I didn’t really know anyone.

That’s when my competitiveness kicked in.

I’ll never forget it, I was sitting up there on stage and Bulls GM Jerry Krause was next to me.

Chicago had passed on me with the No. 1 pick in ’99. I looked over at him like, You should’ve drafted me, Krause.

I’m not a superstitious person, but as the lottery balls were coming out, I think some outside forces were at work. It was my chance to go toe-to-toe with Krause at the draft.

The Rockets made it into the top 10. Then the fifth pick got drawn we were still alive. Then it came down to the last two picks. It was just me and Krause.

I’m telling you, something was in the air that day. When the second pick went to the Bulls, it was time to celebrate.

I looked at Krause again, like, Hey, maybe I could do this GM thing someday.

Afterward, all the media rushed to me. Ahmad Rashad was asking me how I felt. Everyone had questions about whether we were going to be the first team to draft an Asian player with the top pick.

Our press guy, Nelson Luiz, was ecstatic, like we had already won the championship. We got on the phone with Rudy.

“Coach, I got you what you wanted.” 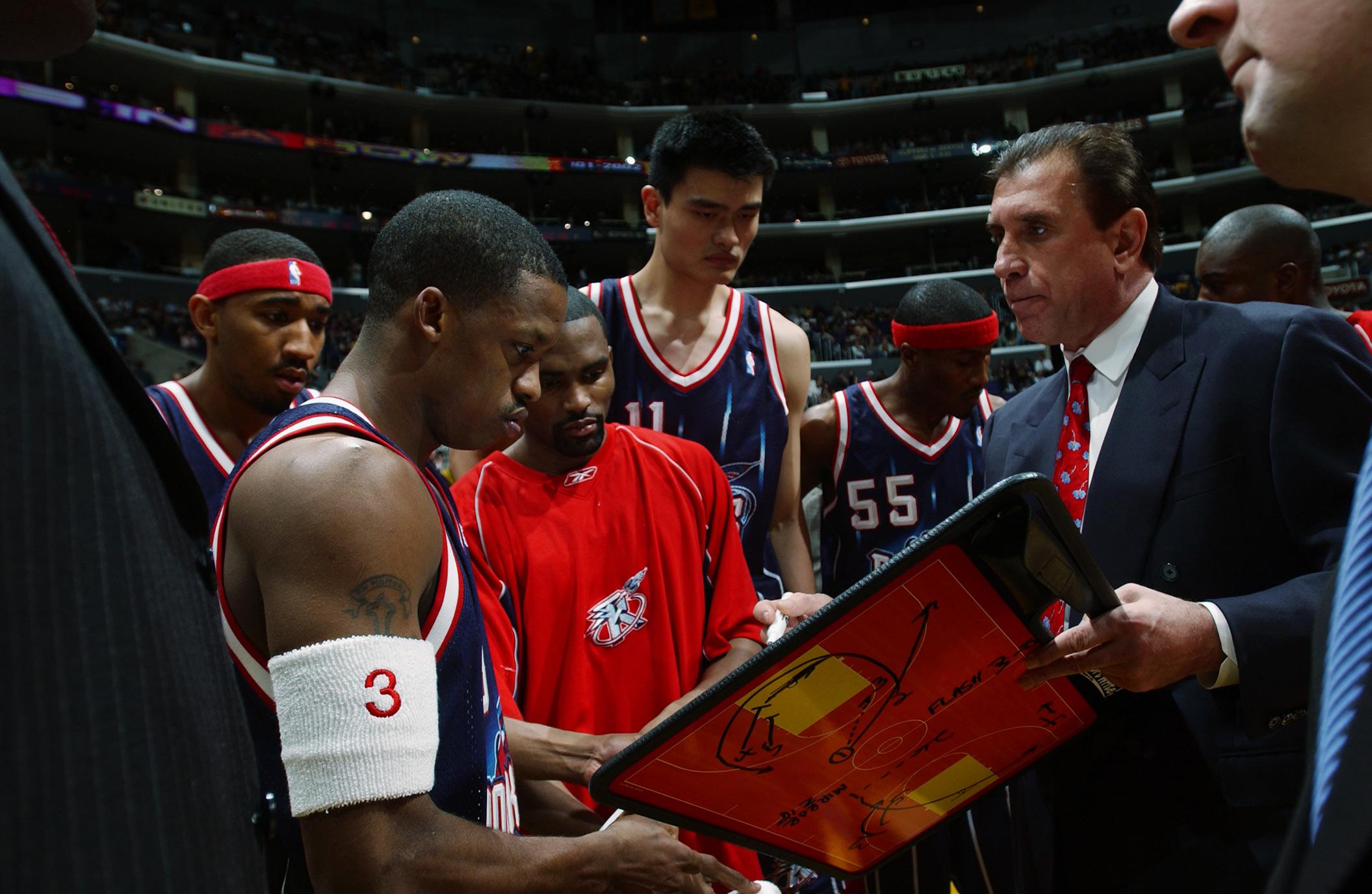 I wanted to tell this story for two reasons. First, I like to think I played a small part in bringing Yao to Houston. Yao as a Chicago Bull? No sir. Wasn’t gonna happen on my watch. (It’s easy to say this in hindsight.)

But the second reason is personal. Thinking again about the draft lottery, I have realized something about that summer. It was the last moment before Yao entered the fishbowl.

And Yao got dropped into a helluva fishbowl, man. I’ve never seen anything like it. He was the Beatles. He was the biggest show in every city we visited. Police escorts. Media everywhere. Cameras everywhere. It is a lot for any young person to adjust to life in the NBA. But Yao also had to carry the weight of two cultures on his shoulders. I always respected and appreciated the grace he showed while doing that.

Yao handled the fishbowl really well. It was me who was bothered by it.

One of the first times we talked in those first weeks Yao was in Houston, I remember walking right up to him and telling him to cut through all the noise. I had watched his game tape. I knew he was a serious talent, and not just hype.

“We need you,” I said to him.  I asked his translator to explain what I meant: All the extra hype was just that — extra. I was looking forward to getting down to basketball. That was all that mattered.

Most of you know Yao the public person. But I was always more interested in Yao the basketball player, the teammate, the private person. I was lucky enough to get to know that side of him. It was a side most people didn’t see.

He was a big kid who loved to order chicken tenders from room service. I can still picture him sitting on his bed — he would always have the hotel push together two queen beds to create a giant Yao Bed. He relished those rare times when he got to chill because he always had so many obligations.

He was the most humble guy in the room. The word flashy just wasn’t in his vocabulary. He adapted to American culture, but never let it change who he was. Funny story: One year, I bought all the big men watches at the end of the season. I’m telling you, these were nice watches. Jacob the Jeweler, I think. But I never saw Yao wear it. He didn’t rock bling. To this day, Yao probably still has that watch sitting in its box.

Yao got better and better every year in the league. During his rookie year, Yao and I practiced pick-and-rolls before and after practice every day. I saw how much he cared about improving as a player. Did you know that even on game days Yao would work out — really hard — for two hours? I would tell him to take it easy, but I guess that was the only way he knew. I’m lucky to say I got to witness one of the hardest working and most agile big men who’s ever played the game.

Yao was also a gracious host who would invite the team to his parents’ restaurant in Houston. He would start every dinner the same way, looking at the guards and saying, “Big men eat first!” 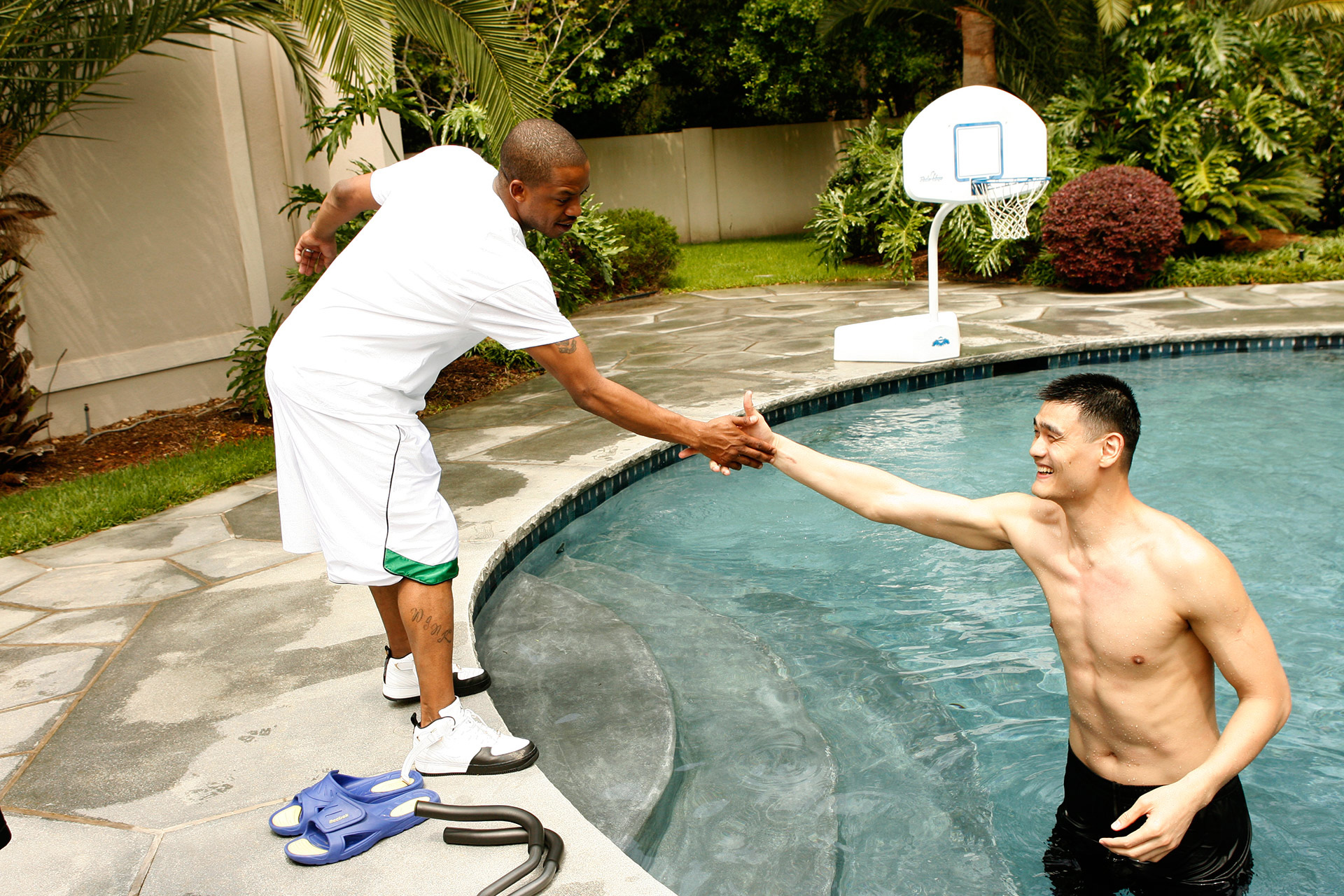 I could go on forever about Yao. But just one last story.

In the summer of 2008, we were both recovering from injuries. Yao had had surgery on his foot in the spring and I had undergone knee surgery that winter. I was supposed to be rehabbing, but I wasn’t doing it consistently. I was frustrated.

I stopped by Yao’s house, which I did every once in a while when I needed to just get away from things. His parents greeted me at the door and led me out to the backyard, where I found Yao in the pool. He and the Rockets’ trainer were doing aquatic exercises to rehab his foot.

“Hey Steve,” he said with the same big smile and deadpan tone he always used with me. “We need you.”

It made me think back to what I had told him before his rookie year about focusing on basketball.

I thought, Dude just turned my own advice back on me.

One last thing. Are you gonna do your speech in two languages? For a pioneer like you, I wouldn’t be surprised. 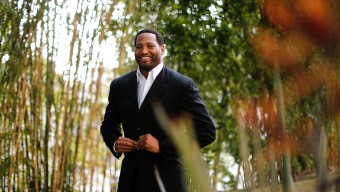 How to Be a Big Shot