This is The Chirp, your all-inclusive look at the best observations, jokes and photos that athletes have recently shared on social media. Because while not every story can be told in 140 characters… some can:

With my girls @serenawilliams and @karliekloss singing along to @taylorswift pic.twitter.com/cYgbKBIW3q

Just saw “Jurassic World”… First thought.. An NFL team should sign Claire.. She was out running dinosaurs in heels, imagine her on a field

I’m finishing up @45PedroMartinez autobiography. Anyone have a good recommendation for my next read?

@ChrisArcher42 The Last Night of the Yankees Dynasty is super interesting

When ur on a long flight. & the toddler behind u is trying to c if they can kick the stuffing out the seat… #massagechair lol

Looks highway safe to me… pic.twitter.com/C0xcz3CNzK

Who in LA doe

Who is watching the bradley vs Vargas fight?

Woke up blessed but still what in the hell am I doing up?

The feeling of not being sure if your hockey sticks made it!!! #bricktournament pic.twitter.com/ygv3GeM3Tl

Enjoying some strawberries and cream during the rain delay #wimbledon pic.twitter.com/hGpfqRpa9v

At least my outfit matches the #Wimbledon umbrellas 🙂 #presswithpetra pic.twitter.com/aA3OGUaFrH

Trout and Donaldson?! wow RT @JordanAszklar: Got that no hitter with @DAVIDprice14. But of course, he’s an Athletic. pic.twitter.com/5fC26Mct7A

Rams defensive end Chris Long on the king of the jungle:

I told these lions you were my brother and they just laid down with fear @Ky1eLong pic.twitter.com/lYOhe0a08M

Hotel internet always works great, streaming Netflix, until you actually need it, like downloading a movie for a flight. Then it shuts off.

Clippers guard Jamal Crawford and more on knowing your limits:

Wish there was more time in a day..

This wouldn’t help… If I remembered to put them back where I got them then the problem would be solved pic.twitter.com/zlHAmB0GV3

What’s your limit for days on a vacation? I’m about 5 days, and then I get homesick or ready to get back into routine

Moms meatloaf would be killer..but I ain’t goin to the grocery store now, too late to start that..

And finally, WTA player Genie Bouchard on the best way out of a slump—memes:

They Can Take Away Your Country, Just Like That 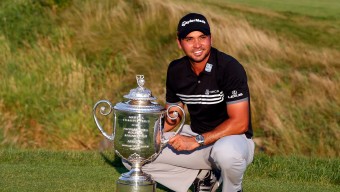